WHAT’S IN A WORD?

Through the connections and networking that resulted from my projects with JCCC, especially the Office of Foreign Studies and through them with Uganda, I met Steven Youngblood, the journalist who is a professor at Park and is Director of their program of “Peace Journalism.”  I was especially interested in their projects in Uganda and Kenya.  They were able to measure the effects of their seminars with journalists on the use of inflammatory language and trigger phrases by directly measuring the number of riots and people killed in the campaign run ups to elections in these two countries.  The cause and effect relationship between the words used on radio and newspaper reports and the subsequent riots and death toll were irrefutable to me.  Using the number of people killed is a pretty dramatic “end point.”  I became a disciple of “Peace Making” by watching our words.

There was an interesting article yesterday in The New Yorker in the Daily Comment section by Jill Lepore, a history professor at Harvard: “What Should We Call the Sixth of January?”  She went on to ask: Coup?  Sedition? Storming?  Saving?  Terrorists?  Riot?  Or simply, January 6th?  Her choice, despite the racial inflections, was “Insurrection.”

But after these extreme examples, which nonetheless show how critical word choice is, we get back to the mundane workings of your Steering Committee for the Simulation Alliance (KCRSA).  Because this committee now is doing all the work, and volunteering their time and effort to make the Alliance active and productive (we will be delivering this month to the grade school kids in KCPS, Covid Coloring Books that we have developed and produced and subsidized – but more on that later), because we have now formally completed the paperwork to become a legitimate non-profit organization, because we now have a part time grant writer and executive administrator, this committee is clearly functioning as a corporate board, but without the benefit of the title.  Therefore, I have recommended to the Committee and they have approved this recommendation, that we change the name of “Steering Committee” to corporate “Board” in the bylaws.

Now each member of this committee will be a “Director” of the Board.  But today I would like to highlight the officers for you.  Kathy Carver is Chair of the Board and President of KCRSA.  You all know her from her years of work in simulation at JCCC and for the community, organizing the annual fall meetings and organizing the meetings of KCRSA.  She has just announced her retirement after this year from active teaching.  Please join me in thanking her for her service to our community and our Alliance and in hoping she will agree to stay on the Board as an ex officio.

We have a new position on the Board and in the executive committee (officers of the Board and of KCRSA) and that is Vice-chair of the Board, Vice-president and President-Elect of KCRSA.  And that is Emily Hillman, head of the ED Program at Truman and UMKC, who has been doing yeoman’s work on our current project.  The Alliance will be in good hands in the future.  The Treasurer of the Board and the Alliance is Melanie Stroda, the Simulation Director at University of St. Mary’s School of Nursing.  Our Secretary is Sheri Daugherty, Manager Center for Pediatric Simulation, Children’s Mercy. Both positions have become time consuming and demanding as our corporate structure now demands bank accounts, tax filings with the IRS, state required records keeping, etc.  Thank you to both for their dedicated work. 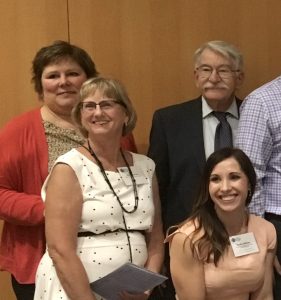